Finally, a Way to Teach Coding to the Touchscreen Generation

First came Generation X. Then the Millennials. And if you have kids under 10, you already know what they’re going to be called: the Touchscreen Generation.

For these kids, who learned to walk and talk as smartphones and tablets were saturating the cultural landscape, a computer with a physical keyboard is archaic and distant, a clattering tool their parents use. The Touchscreen Generation experiences computing as something immediate, direct, intuitive—not as an interaction that happens in a slightly removed way, where the screen and what happens on it are mediated by keys, mice, or trackpads.

And yet there’s a different kind of distance that touchscreens create. Seamless interactions with touchscreens depend on the seamless packaging of apps into self-contained experiences. What kids gain in directness, they lose in an appreciation for how the software on the screen really works, how it was built, how they too could build it.

When I was a kid, I had to know some DOS commands to launch a program, or navigate a file tree, or insert a floppy disk, all of which served to remind me that this computer was a machine, not a magic portal. Interacting with touchscreens, on the other hand, feels so natural that it’s easy to forget that these devices, these apps, are things that someone built. The natural posture for relating to touchscreens is as a consumer, not a creator. That kind of one-way dynamic isn’t a good start to the way the next generation relates to technology.

‘This is a tool that they can use to get their voice out in the world, not just to consume what other people are doing.’
But a new app might be able to break through that passivity by meeting the Touchscreen generation where their fingers live. ScratchJr is a new iPad variation of the Scratch programming language, a tool created at MIT to help teach kids to code. The premise for both is the same: instead of text, Scratch uses interlocking colored blocks to mimic the logical structures and functions of a typical grown-up programming language. Scratch scripts allow their creators to direct and interact with “sprites”—cartoonish characters on the screen. By introducing kids to coding without the hurdles of arcane syntax and bug-prevention, the hope is that they’ll become engaged enough with the process that their sensibilities will shift.

The difference with ScratchJr is that it aims to bring this dynamic to an even younger audience, the kids who have known only tablets and smartphones. “We wanted to make sure young people aren’t just using tablet for browsing and consuming,” says Professor Mitchel Resnick, head of the MIT Media Lab’s Lifelong Kindergarten group, which developed ScratchJr along with researchers at Tufts University and the Montreal-based Playful Invention Company. “This is a tool that they can use to get their voice out in the world, not just to consume what other people are doing.”

ScratchJr isn’t as sophisticated as Scratch itself, which works as either a standalone app or a web app on PCs. But that relative lack of complexity turns out to be ScratchJr’s strongest selling point. While Scratch is aimed at eight-year-olds and up, ScratchJr is targeted at kids five to seven. It’s almost purely graphic-driven, which makes it accessible to an age group for whom reading is sometimes still a lot of work. And the only time the iPad keyboard ever comes into play is when young coders want to change the text in the word-bubble coming from a character’s mouth. Otherwise, they’re creating rudimentary but fun programs by tapping and dragging on the touchscreen interface, which is as native to many of them as turning on a light switch.

Resnick is also quick to emphasize that although stripped down, ScratchJr retains the essential computational concepts taught by its older sibling, such as events, sequencing, and iteration. These core ideas are key to the aim of the Scratch project to teach coding as a new kind of literacy. “Just as with traditional literacy, it’s important to learn to read, but it’s also important to learn to write,” Resnick says.


Not Just on the Receiving End

But as with reading and writing for earlier generations when those skills were less commonplace, parental anxiety around learning to code is economic, not just idealistic. Skilled programmers these days have their pick of high-paying jobs. As the outlook even for such venerable professions as law and medicine become murkier, the mythology of the Zuckerbergian coder-tycoon becomes all the more seductive.

But it would be a shame to view creations like ScratchJr mainly as entry points through which helicopter parents can guide their children onto the joyless path toward a college-ready kid-CV. Teaching kids to code isn’t about giving them a better chance in 20 years of fighting off the robots who will otherwise take their jobs. It’s about teaching them now that the robot isn’t running the show.

Interactive digital technologies are now unavoidably a part of growing up, which makes it all the more important to start early in trying to shape how the Touchscreen Generation relates to that technology. They need to know that they can take the robot apart and put it back together again; that if they don’t like the app, they can make their own; that if they want new kinds of creatures, tools, and materials in Minecraft, they can learn Java and mod it themselves. Tinkering is a way to make technology your own, and tinkering is what a project like ScratchJr makes possible, on a device kids are already using. The most important thing kids can learn when they learn to code is that, when it comes to technology, they’re not just on the receiving end.
Posted by CDR-Data at 3:28 PM No comments:

With Google Fiber months away from its launch in Austin, competitors are ramping up their Internet speeds and services in preparation for a titan-sized fight over customers. 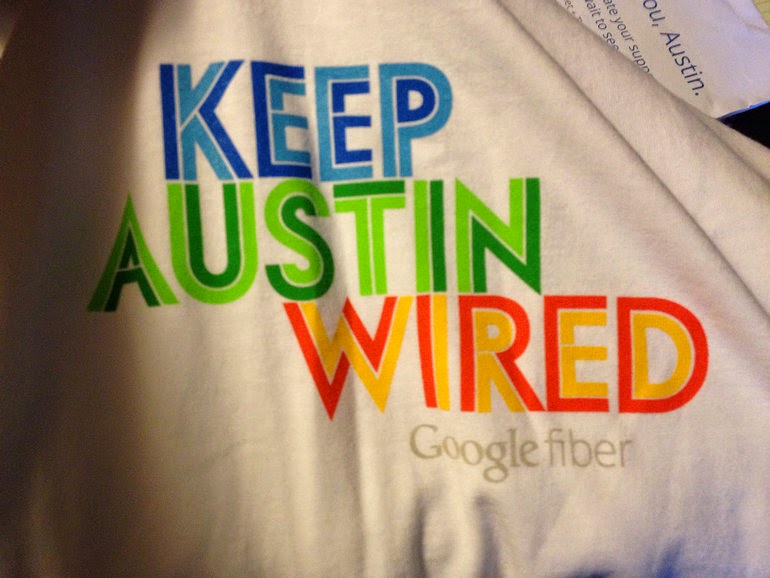 When it comes to Internet service, Austin is about to become one of the most competitive markets in the nation.

Google Inc. is still months away from launching its superfast Google Fiber Internet service in Austin, but Google’s competitors are already gearing up for a titan-sized fight over customers by ramping up their own Internet speeds and services.

As the battle heats up, the beneficiaries could be Austin consumers, who will have more options when it comes to Internet and subscription TV services.

Google began the Internet arms race in April 2013, when it announced that Austin would be the second U.S. city — after Kansas City— to get its Google Fiber 1 gigabit Internet broadband network. Google Fiber is more than 100 times faster than today’s typical broadband Internet access. At 1 gigabit, a user could download 25 songs in 1 second, a TV show in 3 seconds and a high-definition movie in less than 36 seconds, according to data from AT&T.

Local leaders said landing the service would accelerate the development of new tech companies and help with new broadband services for schools and hospitals and other parts of the city. Google is currently working on the infrastructure for the Google Fiber service. Last week, an American-Statesman review of hundreds of city-issued permits found that the search-engine giant is in the midst of installing thousands of feet of cable conduit along 176 city streets – mostly in South Austin and East Austin.

After Google’s announcement that Google Fiber was coming to Austin, the city’s two big established broadband Internet providers, Time Warner Cable and AT&T Inc., said they were ready to make additional investments in their networks as they prepare to compete with the arrival of Google Fiber — and they have done so.

Late last year, AT&T rolled out its fast-growing U-Verse service with its “GigaPower” feature, which offers speeds of up to 300 megabits per second. This year, the San Antonio-based telecom giant said, it plans to up those speeds to 1 gigabit per second.

AT&T said it would double the reach of its Austin area fiber network — already available to thousands of homes — after the “incredible response” to a December rollout of their faster U-Verse product, said Tracy King, AT&T’s vice president of public affairs.

“Sales continue to exceed our expectations and it’s clear that residents want our fastest speeds,” King said. “We can’t wait to get our faster broadband speeds into their hands and homes.”

Already, the two companies have faced off in Kansas City, where Google Fiber first launched last year and has taken market share from AT&T, the company said in federal filings.

The filings, which are tied to AT&T’s ongoing efforts to buy DirectTV, say early performance in Kansas City has led experts to predict that Google Fiber will capture the business of at least half of the covered households in three to four years. In Kansas City, the basic price for 1-gigabit Internet access is $70 a month. Internet plus cable TV costs $120 a month. The company also offers a slower basic broadband package free for seven years after a $300 network construction fee is paid.

“Google Fiber is the most ambitious and potentially disruptive BSP,” or fiber-based broadband service provider, the filings said.

AT&T has “responded to Google’s planned entry into Austin with competitive offers and advertisements,” the filings said.

Time Warner, meanwhile, also continues to ramp up its fight for customers. The provider began rolling out faster Internet speeds this summer with close to 40 percent of its Austin-area customers — about 100,000 customers — already receiving the new speeds, said Melissa Sorola, director of public relations at Time Warner Cable.
Customers with all six of Time Warner’s Internet service plans are seeing an increase in speeds. For example, Time Warner customers who subscribe to their standard plan are going from to 15 Mbps to 50 Mbps. The move, Sorola said, comes “at no extra charge.”

The first round of boosted speeds were launched in downtown Austin, West Campus and Hyde Park, among other communities.

This month, another 20 percent of Time Warner customers will see new speeds, including Central Texas residents in far South Austin, Lago Vista, Round Rock, Marble Falls and the Bastrop County community of Smithville. In August, another 20 percent will see the new speeds in areas that include San Marcos, Bastrop, Lakeway, and Duval.

By the end of fall, all of Time Warner’s customers will have access to faster Internet speeds, Sorola said.
“Feedback has been positive,” she said. “We’re seeing a steady flow of customers coming in for a new modem (required to get the new service) and …excitement about being able to experience the faster speeds.”

In February, Grande Communications jumped ahead of Google and AT&T by launching super-fast Internet in West Austin with speeds of up to 1 gigabit.

Grande has said its new Internet service will cost $65 per month with no contract required and the price decreases when the service is bundled with cable TV and home phone service. The Grande service was initially available to about a quarter of the 75,000 homes and businesses in the Austin area that are wired for their service, including the Belmont, Rosedale, Bryker Woods, Pemberton Heights, Tarrytown, Oakmont Heights and Old Enfield neighborhoods.

At the time of the announcement, president Matt Murphy said the bump in speed is, in part, an effort to fend off AT&T and Google.

“There’s a certain sizzle to 1 gigabit that people are excited about, ” he said. “We’re nimble and able to do things faster. We’re consciously doing this to beat Google.”
Posted by CDR-Data at 1:53 PM No comments: